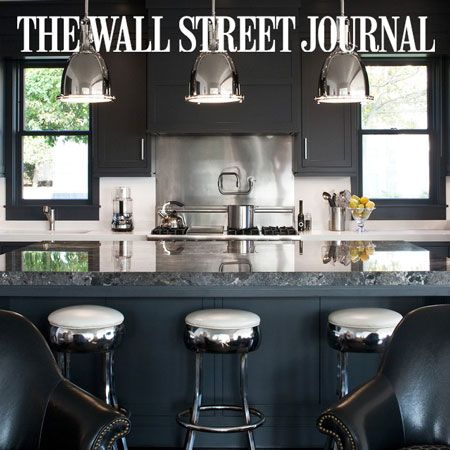 FUMED OAK. Knockout Black. Down Pipe. No, these are not the latest craft cocktails; they're the names of some of the surfaces and colors that are leading kitchens into a new Dark Age. And we're talking about more than just granite countertops or a wall splashed with chalkboard paint. Referencing butler's pantries as well as Art Deco and steam-punk styling, designers are beginning to abandon the all-white Parisian patisserie color scheme—the prevailing millennium palette—for dramatic kitchens infused with smoky hues like charcoal gray and licorice black.

"It's definitely a sophisticated, decorated feel," said Christopher Peacock, founder of Christopher Peacock Home, a Greenwich, Conn.-based high-end manufacturer of custom kitchen cabinetry. "It says, 'been there, done that' to those who still own a white kitchen."

"I hate white kitchens," Joe Lucas, a Los Angeles interior designer, declared. "A deep lacquered color makes a small city kitchen look amazing and, in an expansive kitchen, dark shades help ground the space." For a client in Hermosa Beach, Calif., Mr. Lucas used Down Pipe by Farrow & Ball, a rich gray paint that the company said has more than doubled in sales within the past four years.

"People aren't afraid of the dark," said designer Maria Stapperfenne, the 2015 president-elect of the National Kitchen & Bath Association. While natural wood cabinetry has made inroads against the all-white look, too—injecting a warm, organic quality into kitchens—she noted a rise in espresso and ebony stains on cupboards and in dark oil-rubbed bronze and black iron for hardware.

Led by the recent popularity of trophy stoves such as the black-enameled cast-iron models by upscale European manufacturers AGA and La Cornue, American appliance companies are also embracing the dark side: Viking offers its VGR 7 series ranges in black and graphite gray and, this fall, Jenn-Air debuts the $8,499 Obsidian, a stainless steel refrigerator with an anthracite interior.

"Younger consumers don't want the Tuscan stone or flowery French country kitchen their moms had," Ms. Stapperfenne added. "They're seeking out nontraditional, even industrial materials, with a more masculine flavor for kitchens that can accommodate multiple cooks."

Kitchens are now "absolutely gender-neutral," said Mark Hanna, a partner at Leeza Surfaces, which developed a proprietary glass countertop, Kool Glass, in Knockout Black and a gunmetal shade called Shock Black. "Black is sexy," he said. "And the kitchen has clearly become a cool place for the man of the house."

Yet women are also drawn to dark kitchens. For the actress Cameron Diaz, designer Kelly Wearstler paired ebonized floors with deep emerald-green cabinetry. And New York architect Richard Sammons, a partner in the firm Fairfax & Sammons, created a kitchen for the actress Liv Tyler in an eggplant shade so deep he calls it "bible black." He used the same hue for the cabinetry in the Greenwich Village townhouse he shares with his wife.

"Dark materials create atmosphere," said Mr. Sammons. "They are a corrective antidote to the antiseptic quality of the 20th-century white-enameled kitchen or the 'professional' stainless steel kitchen so recently in vogue."

Dusky kitchens let appliances and hardware shine, said John Day of LDA Architects, which designed a black, Art Deco-inspired kitchen for a modern shingle-style home north of Boston. The firm used fumed oak floors and maple cabinets finished with a satin-black European conversion varnish. A stainless steel range and nickel pendant lights, along with white Caesarstone back counters, act as tonal counterpoints. "The kitchen did not get a lot of natural light and was used mostly at night," said Mr. Day, "so we just decided to embrace it."

Sometimes just a touch of black can transform a kitchen. In a historic apartment, New York designer Fawn Galli painted the wainscoting black and added wallpaper in an inky, overscale lace pattern above it. "It made an uneventful kitchen exciting—not smaller but cozy and memorable," she said of the steam punk-influenced look. "These days, the kitchen is a real decorated room, rather than just a functional space, and black is the new white." Acknowledging that it's not for shrinking violets, Ms. Galli allowed: "Yes, black is badass. There's no way around it."