A New Era At Viking 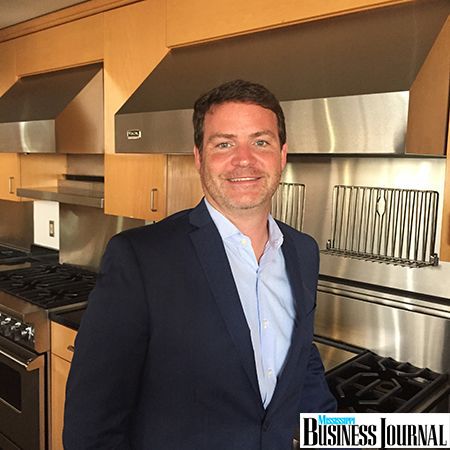 A kitchen appliances executive whose background includes working the assembly line at Oxford’s Whirlpool plant is the new head of revamped Viking Ranges in Greenwood.

Kevin Brown, a University of Mississippi electrical engineering graduate who started with Viking in 2007, joined with a team of Middleby Corp. executives in 2013 to transform the products line of the ultra-premium home oven and refrigeration company. The effort began after the Elgin, Ill.-based Middleby bought the company from Fred Carl Jr. in a $340 million transaction.

Middleby, the world’s largest kitchen appliances maker, appointed Brown president earlier this month. “He has proven time and time again that he can deliver results,” said Selim A. Bassoul, Middleby chairman and CEO, in a press release.

He will also manage a stabilized workforce in Greenwood of about 600 that he expects to increase as Viking continues to launch new products. “I am actually looking for mechanics and engineers right now,” Brown said in an interview last week.

At the moment. Viking has added a second shift for fabrication and workers are putting in overtime to help the company meet lead-time requirements, Brown said, and added: “Growth comes with improved quality.”

Brown’s promotion follows his 2 ½ years of work re-engineering more than 90 percent of the kitchen appliance products made by Viking, a national leader in manufacturing high-end ovens and refrigeration equipment for the residential market.

Middleby began the redesigns after a government-ordered recall of gas ovens sold from the inventory the publicly held Middleby acquired in the purchase of the 25-year-old Viking Range. Those problems led Middleby to file a $100 million lawsuit against Carl in October 2015.

“Viking has always had the absolutely best looking product on the market,” Brown said in explaining that satisfaction with the aesthetics allowed Middleby to more fully concentrate on improving operational features of the Viking products.

Engineers took the “bookshelf” approach by which features that have proven worthy in commercial equipment were pulled from the shelf and put into Viking’s home products, Brown said.

All testing is done at laboratories inside the Greenwood plant. “We do test to failure,” Brown said, giving an exhaustive process for a refrigerator door as an example. “We slam the door 300,000 times with 250 pounds of pressure.”

As a kitchen appliance manufacturer whose products are in two out of three restaurants worldwide, Middleby puts a premium on innovation for its commercial products, the company says.

Many of those innovations have gone into Viking’s residential products, with a goal to make food more quickly, more efficiently and with the best quality possible, Middleby says.

Among enhancements are larger BTU burners, infra-red broilers for searing food such as steaks and seafood and convection ovens that give truly even heating and bakery-like results, according to Middleby.

The new Viking has launched 103 new products for the residential market. In addition to such ovens as the TurboChef, the Greenwood manufacturer has added new refrigeration platforms, ventilation platforms, outdoor cooking products sand dishwashers, Brown said.

Beyond incorporating restaurant-style components, Viking has initiated in the residential products the sort of rapid-response strategy it employs for its restaurant customers, said Tim Tyler, Viking’s marketing chief.

“If a restaurant is down and its equipment is not working, the restaurant is not making money,” Tyler said. Accordingly, Middleby’s must address such emergencies without delay, he said.

“This is incorporated into Viking. We can reach out and fix these issues just like on the restaurant side.”

A lot of appliance industry watchers are taking notice, according to Tyler, citing a list of awards that include Best Gas Range from Good Housekeeping Magazine, Professional Gas Cooktop Editor’s Choice Award from USA Today, and the first three places in the National Kitchen and Bath Industry Show competition.

The potential Middleby sees in Viking has led the parent company to create a residential manufacturing group with Viking as the flagship, according to Tyler.

Brown said a key step toward Viking’s current-day success came with a decision to buy out all of Viking’s independent distributors. That brought the company much closer to the customer, he said.

“We have a very streamlined process, from division to consumer.”

Distribution is done from 10 warehouses across Mississippi.

Brown says his vision for Viking extends beyond the United States. Going international is the key to the exponential growth Viking seeks, he said.

“My philosophy is that I want to make the world flat when it comes to our products,” Brown said.

To this end, Viking is reviewing requirements for meeting international certification standards. Brown said he expects the biggest challenge in going global will be setting up the international infrastructure.

The alternative is to stay stationary – something Brown says he won’t do. “The most dangerous move for a company,” he said, “is the failure to make a move.”