A Stucco Hood Stands Out In A Functional Seattle Kitchen By Erin Carlyle, Houzz 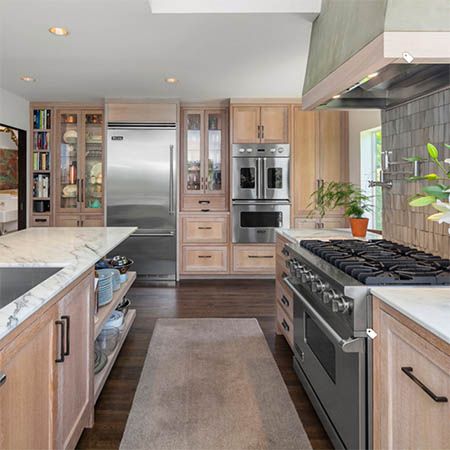 Kitchen at a Glance

Who lives here: Jacob Wight, Michael Syltebo and their dog and two cats

The backstory: Jacob Wight and Michael Syltebo purchased their home from owners who hadn’t occupied it for 15 years, and the residence was pretty run-down. “The roof had collapsed, the windows had blown” out, says Wight of the design-build firm Syltebo Wight Homes. He has built or remodeled a couple dozen homes, including four of his own. The couple embarked on a full renovation, including this kitchen. The new kitchen is about 100 square feet larger than the original, thanks to several changes, including removing several walls and encapsulating the space previously occupied by an outdoor deck.

The layout: Wight designed the kitchen to have separate zones for different functions: prepping, cooking and cleanup. “I love cooking and love cooking with other people and don’t like being back to back or on top of each other,” he says. The kitchen island and sink is the prep work zone and also where the dishwasher is situated. A second cook can comfortably stand at the range top, which is deliberately offset from the sink. The appliances are separated onto a single wall so that someone pulling out items from the refrigerator or ovens doesn’t back into the cooks.

Pass-through window and deck: The window to the right of the range hood opens onto a deck off the kitchen. When the window is open the counter serves as a convenient passthrough and can also be used as a bar or buffet area accessible from the deck.

Cabinetry: The homeowners wanted to use only lower cabinetry for most of the kitchen, and Wight made several trips to a local specialty lumber shop to find the right wood. Typically, he likes to use rift-cut white oak, but this time no matter what stain he tried he couldn’t get the luster, depth and dimension he wanted — until someone suggested cerused wood. “Cerusing is when they take the raw wood and use a wire brush to expose the grain, then apply a white glazing in the grain and wipe it off. The glazing sticks in the exposed grooves, and over that you clear coat it,” Wight explains. Cerused rift-cut white oak turned out to be exactly what he wanted. The cabinet faces are an inset style and Wight left an 8-inch separation, or reveal, between each cabinet front, and also added a crown molding piece around the top to give the cabinetry wall a furniture feel.

Lake view: Wight also designed this kitchen so a chef working at the island would look out onto views of Seattle’s Lake Washington, as shown in this photo taken from the other side of the room.

Range hood: Wight framed out a range hood with two-by-fours and drywall and coated it in primer stucco. He says this hood treatment is one of his signature pieces that he’s done in many homes. The stucco range hood disguises a top-of-the-line hood insert and has a smooth texture like Venetian plaster, Wight says. Range hood insert: Vent-A-Hood

Backsplash: The backsplash behind the range is comprised of handmade concrete tile, and each individual tile has a slightly different shape. “It’s a real collected look, but it has movement,” Wight says.

Flooring: The homeowners used the same wood the cabinets are made out of — rift-cut white oak — for the floor but finished it with a darker stain. “The dark floor keeps that contemporary, modern look,” Wight says.

Appliance wall: Wight is a fan of high-end appliances and loves stainless steel in particular. To add interest to the appliance wall, he varied the depth of the cabinetry, added glass fronts to some of the cabinet fronts and included a built-in bookshelf. Appliances: Viking

Wight spends a lot of time in this kitchen, and the island is where he likes to roll out dough and use his breadmaker. Note the open window on the right, and the open door frame on the left. Both lead to the deck outside. Bar stools: Restoration Hardware about a decade ago

Deck: The deck can be accessed from this door in the kitchen, around the corner from the stove. Wight says he had a hard time convincing everyone, from city planners to his partner, that his vision for this deck was the right design move. “No one wanted to let me do it,” Wight says. But in the end, he is pleased with the outcome. “The deck makes not only the kitchen, but it makes the front of the house,” he says.