A Victorian-Style Home in Delaware Bursts With Art and Color By Kelly Porter, Houzz 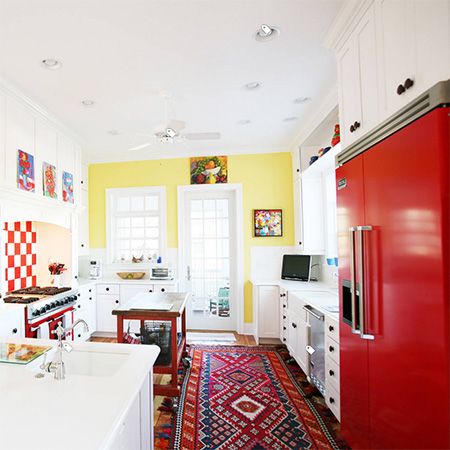 A Victorian-Style Home in Delaware Bursts With Art and Color By Kelly Porter, Houzz Rehoboth Beach is a popular vacation spot in the southern part of Delaware. Every summer for decades, visitors (mostly from the Mid-Atlantic and Northeast) have flocked to this quaint beach town for rest, relaxation and family getaways. On the north side of Rehoboth Beach, there sits a beautiful summer house that appears to have been there forever ... and that's exactly what the homeowners want you to think. However, once inside this extraordinary Victorian-style home, it becomes apparent that, although it has a lived-in feel, this home is chock full of modern conveniences, new furnishings, finishes — and did I mention tons of color?

Designer Matty Adler says that the interiors were influenced by the homeowner's colorful, bubbly personality. He describes the home's style as being "country whimsy." Here, in the family room, the homeowner painted the red fireplace surround herself. The bright and cheery yellow wall color became the main "neutral" color for the entire home.

Built in 2009, the 5,600 square-foot home is located in an exclusive community nestled in between a canal and the Atlantic Ocean. The house is located on the the same site as the homeowners' previous beach house, which was torn down. The Baltimore-based couple wanted a new home large enough to accommodate their three grown children and their families, including several grandchildren. With the wife leading the design, this house has become a happy hub for summer vacations. Interesting facts: The lattice work on the front porch was re-created to match the lattice that the homeowner designed herself for the previous beach house. Even with its overall historic style, this house has green features, including geothermal and solar capabilities.

The homeowner, an avid painter/artist, is not afraid of color. She wanted to fill her home with colorful art and vivid hues on the walls. In fact, she originally requested a red kitchen but at the suggestion of designer Matty Adler, opted for striking red appliances instead. "I knew how much color was going into the house," says Adler. So for balance, he chose white for the cabinets, counter tops and trim. In addition, the Viking appliances in Racing Red gave a pop of color to the kitchen without overwhelming the space.

A farm-style island and checkerboard backsplash both play off of the kitchen's color scheme and add to the casual feel. Above the stove, a trio of artwork introduces even more color to the space. In addition to buying many of the furnishings locally at antique shops, the homeowner also brought back a variety of fabrics from a shopping trip in London. Many of those fabrics were used for the draperies and some of the upholstery in the home.

The home's color palette was also influenced by the homeowner's artwork and works by other local artists. In this art-filled parlor, you'll also find one of many beautiful area rugs that are throughout the home. All of the hardwood flooring is reclaimed pine from an old factory in Chicago. Orange was also used for the powder room which showcases even more art.

In somewhat of a departure from the rest of the home, the master bathroom reflects the homeowners' desire for a Zen, spa-like retreat. As to not stray from the overall color palette, they selected a vivid blue mosaic tile and used it for the wall color.

The homeowner selected a deep, saturated pink for the wall color in this children's bedroom. This is just one of the rooms for her grandchildren: another is painted green, and there are bunk beds in the boy's room, which is painted red.

This spectacular vignette greets visitors at the top of the stairs. The homeowner's collection of roosters is proudly displayed beneath carnival letters that spell out the word, FUN. When it comes to this amazing home, that pretty much sums it up!

The paint colors shown here include: