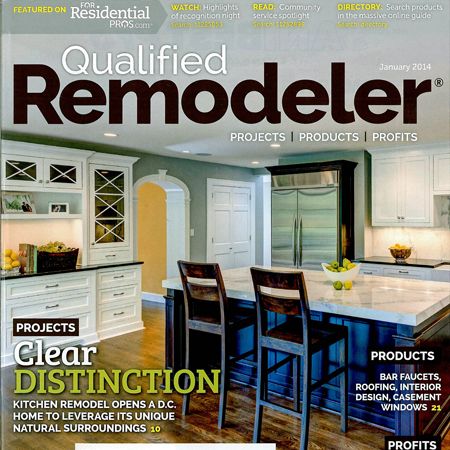 Nestled among the trees and perched atop a slope overlooking Archibald Glover National Park, a 1930s brick colonial in Foxhall, D.C., held character but came with challenges. The owners first contacted Landis Construction of Washington, D.C., for advice about whether or not to buy the home. After their purchase, they contracted Landis to create a master plan that included a two-story addition on one side and completely reconfigured the second floor. The owners decided to start with the plan's first phase, which renovated approximately 70 percent of the ground floor.

Ethan Landis, co-founder of Landis Construction, says the kitchen was the focal point of that work. "The original kitchen was an 8-by-8-ft. space in the center of the home's interior. Our clients wanted to take advantage of the wonderful views at the rear of the house so we combined a warren of five small rooms into one large room that opens onto the back deck and showcases the park," explained Landis.

The new 400-sq.-ft. great room contains an eat-in kitchen and informal dining space. The previous room at the back of the house had been created by converting the home's original garage into a small family room. The rear wall had single-pane glass, and steel-framed windows and a center glass double-door connecting to the deck. Landis rebuilt and redesigned the wall with a double-glazed system that provides thermal breaks for insulation. Because an informal dining table eventually would sit next to the window wall, Landis replaced the door in the middle with two sliding doors on each end to improve the access to the deck without clashing with the table's use.

From the start, the Landis team knew that the renovation would require a structural wall to be removed to combine the multiple rooms. The former garage-turned-family-room's interior wall was a masonry wall with the home's framing spanning it. For support, Landis added a 23-ft. steel I-beam across the structure in the center of the room.

The crew had to build support walls on the left and right sides first. Then they carefully cut a channel through the center, including an exterior brick wall, to slide the steel beam into place.

"It was tricky to get it in," recalls project manager Allen Apple. "Six men had to lift up this enormous beam from the outside and gradually slide it across scaffolding into the space. We had to jack it into the precise place and then lock it into place with brick, mortar and steel as specified by the engineer.

To support the floor system, they drilled holes through the steel I-beam and placed wooden 2-by-8s within the center of the "I" (the beam's web) on either side. They then bolted these 2-by-8s together, effectively sandwiching the I-beam between the wood. The solution made reattaching the joists easier while leveraging the I-beam as the structural support. "This allowed us to install joist hangers and have the steel rest in plane with the second-floor structure. The end result is that no one can tell there is a steel beam in the ceiling," Landis says.

With exposed exterior brickwork disrupted by the new channel for the steel beam and two old windows that had to be in-filled, the team had to find bricks that were just the right size and color, with correctly colored mortar, so the finished project would no look patched. The bricks were special ordered, but they used linseed oil to help enhance the color of the brick, which is an old mason's trick.

NEW INFRASTRUCTURE
"In order to integrate systems with the new beam, we had to redo the plumbing and electrical work in the ceiling, which impacted two existing bathrooms above," Landis notes. "In addition, we switched out an old boiler and all the radiators, as well as a high-velocity AC system with two high-efficiency forced-air systems." This required all new ductwork, and the team added an energy recover ventilator to bring in the correct amount of fresh air.

To accommodate and install new ducts in the kitchen area and some floor outlets, the team had to dig up the old concrete garage floor. They took the opportunity to better insulate the home by placing spray foam insulation in the exterior. To install the new wood flooring in plane with the existing house, they added a liquid waterproofing membrane over the concrete and placed two layers of plywood on top of it.

FINAL TOUCHES
Two custom-milled archways connect the kitchen to the formal dining room. "Formerly, these openings were simply rectangles but we wanted to match existing arches in the foyer," Landis says. "We also custom fabricated the trim work to complement the home's interior moldings."

Landis' team designed and fabricated custom cabinets with inset doors. White oak strip flooring is stained to match all the floors on the first level of the house. The renovation includes all new appliances and recessed lighting with dimmers combined with under-counter lighting. The center of the kitchen work area is a cherry wood island stained an espresso coffee color and topped with Calacatta Gold marble. A full stone backsplash in the same Calacatta Gold marble ties the kitchen together, and the open space creates a bright and functional kitchen from which to enjoy the park.