Kitchen equipment manufacturers today are rushing to cram as much technology as possible into their products. Ovens feature high-resolution screens and fridges can open despite not having door handles. Although those technologies are impressive, they don’t improve the core cooking experience. Viking Range takes a different approach when deciding what technology to incorporate into its latest product lines. The company’s goal is to develop features that engage its users and incorporates proven commercial technologies borrowed from sister Middleby companies into the Viking residential product line. These features and technologies, once reserved only for professional chefs are now available for the home chef, only from Viking.

Examples of these proven commercial restaurant technologies include restaurant caliber convection systems, infrared broilers and high performance tower burners. Other entirely new technologies include the a French door double oven, which can open ambidextrously to improve ease of access, and the Viking TurboChef Oven that uses impingement air to cook 15 times faster than any other oven.

Technology is one way Viking’s owner, the Middleby Corp., a manufacturer of commercial cooking and processing equipment, has supported and revolutionized the 35-year-old brand. Many of Middleby’s advancements for commercial chefs are finding their way into Viking’s 7-series wall ovens and refrigerators such has a no preheat option for the newest French door oven. Brown says it’s an example of “bookshelf technology” – proven features that can be easily adopted into a residential product. “It brings in technology that allows us to accentuate that and revolutionize [products],” he adds.

Viking’s new 7-series refrigerators feature Bluezone Fresh Preservation, which uses a patented air purification and food preservation technology to purify the air and extend the shelf life of fruits and vegetables. Cauliflower has lasted as long as three months in some tests. What’s more, the purification in the air kills odors and prevents foods from absorbing the smells and taste of other items in the fridge. Brown poses Viking’s approach to technology as a practical question: “Do we want a TV on our door or do we want our key lime pie not to taste like garlic?”

In this way, Viking stays innovative without following the same technology trends as the rest of the industry. As an engineer, Brown says Viking’s ability to make subtle innovations are what attracted him to join the company in the first place. “We have Wi-Fi connectivity, but we use it only where it enhances that experience,” he says. “It’s fun from an engineering perspective to be able to use that technology and be part of that culinary lifestyle.”

Brown has been with Viking Range for 10 years, the last five of which have been under the ownership of Middleby. Viking Range has been a highly regarded brand since the company was founded in the mid-1980s as a means to bring restaurant-quality kitchen equipment to residential homes. By introducing the first professional range for home use, Viking Range essentially created the modern luxury kitchen market. The company’s long-standing and positive brand recognition and reputation was a key reason Middleby acquired the brand in 2012.

Brown says the design is the soul of Viking Range – customers immediately know a Viking Range product from its look – but Middleby’s guidance and support brought improved engineering and quality to the company’s equipment. “The largest perspective changes are the amount of focus that we have in infusing the commercial technology into our platform and focusing on quality,” Brown says of Middleby’s influence.

Viking kept its signature look, but the improvements under the hood of the past five years have been significant. Many of those changes are the result of simplifying the assembly and components to reduce variation and increase quality consistency. For example, Viking’s engineers cut the equivalent of a 32 story buildings in length of wire harnessing out of one product with no impact on performance. The wire harness is an afterthought for many manufacturers, Brown says, but by focusing on that area Viking created a fully integrated design that holds up better over years of use. “I always believe in reducing the variation and controlling the nominal,” Brown explains. “You can set a goal and reach it, but if that goal has a wide variation in what you deliver on a daily basis then you don’t really have control.”

The design of Viking’s products invokes the culinary lifestyle and the company now takes greater care to carry that culinary philosophy through the entire product. “We look internally at process and products to make sure what’s underneath the hood has the same integrity and wow factor as when you look at the range,” Brown says.

Every product manufactured in Viking’s three facilities are checked repeatedly throughout the production process. For the ovens, the porcelain cavities are calibrated at the first step of manufacturing and again before they go out the door to ensure they match specifications without variation. Cameras capable of detecting defects were added to the end of the production line to ensure every appliance is assembled correctly.

But Viking’s quality process doesn’t end with the assembly line. Every item undergoes short- and long-term reliability testing. A refrigerator door, for instance, may have 250-pound weights added and tested to more than three times life to ensure the hinges hold up under extreme stress. Brown say Viking looks at the reliability curve and lifecycle of each product and touches on every point of potential failure. “Unlike our competitors in the industry, we do not test to pass a standard; we test to failure to identify the weak links and design them out.”

Brown buys into the continuous improvement philosophy of kaizen. He believes in never being happy and constantly finding ways of doing things better. Since Middleby bought Viking in 2012, the company has made strides in reliability and manufacturing quality, but the biggest leap, Brown says, has been in customer service.

The Viking brand continues to grow its sterling reputation because of its high quality and engaging features, but when something does go wrong the company must react quickly to solve the problem. Here, too, the support of Middleby has made an impact. Brown says Middleby brought with it an expectation for investment in customer service. When a Middleby oven at a pizza chain goes down, that results in lost revenue until the issue is repaired so a quick response is essential. Even an aesthetic problem like a lost knob deserves premium customer service according to the company’s philosophy. Viking is adopting that approach with its own customers. “We took that mentality and brought it into the residential industry,” Brown says.

By utilizing Middleby’s established structure, Viking is introducing 24-hour customer support. Traditionally, service resolutions can take weeks for the residential market, but Viking’s goal is to have equipment repair times measured in hours, on par with the commercial market. “We will be setting the standard for the industry,” Brown says.

To make those short resolution times possible, Viking is setting up an infrastructure of exclusive service providers that can respond to customer issues. When it comes to service providers, Viking looks for quality, not quantity. “We want to reduce our service providers and make sure we support the right ones, but we do that strategically,” Brown says.

The company paired down its base of service providers using a practical, analytical and graphical approach. First, it looked at which providers met its high standards, then their turnarounds and response times and finally, whether they filled a geographic location where there was a need. By analyzing that data, Viking determined which service providers to invest more with and which ones to cut loose. The company is still in the process of trimming that list down, but ultimately wants to reduce its number of service providers by 75 percent by Q2 2017. Already, about 80 percent of Viking’s service calls are being directed to the 25 percent of providers it intends to continue working with.

But service providers are only part of the equation. The timeline to deliver new components to the customer also impacts how quickly their range or refrigerator can be back in operation. Parts are already regionally located so Viking can deliver the necessary component for a repair within a day of being ordered. Brown likens it to what the company is doing on the manufacturing side. If a part takes one day to arrive on one order and then five days the next time, the company tries to figure out what caused the difference. By correcting those issues, Viking has become more consistent in its repair times. “If you have a problem and you find your root cause for variation you then can reduce your variation,” Brown says.

Having already helped Viking reinvent the ways it develops and supports its products, Middleby is also opening the brand up to a larger international audience. Although the majority of Viking’s customers are within the United States, its foreign presence is growing through Middleby Worldwide, a global distribution network for Middleby companies.

“Any new product we come out with has to be designed like the world is flat,” Brown says. Just as a laptop charger automatically converts to local voltage standards, Viking’s products are now being designed to work with both American and international electrical currents, enabling the company to more quickly introduce its products to Middleby’s global customers. “We want to be something that can go anywhere in the world,” Brown says.

“International is our growth, that’s what we’re excited about,” he adds. “We will continue to innovate and provide the Viking customer true professional performance for their home.” 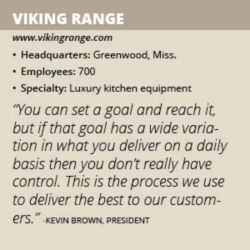 Viking Range LLC originated ultra-premium commercial-type appliances for the home, creating a whole new category of home appliances. Committed to innovative product design, unrivaled performance and peerless quality, Viking is headquartered in Greenwood, Miss., and is a subsidiary of The Middleby Corp., a long-time leader in commercial kitchen technology. Viking appliances are recognized globally as the foremost brand in the high-end appliance industry and are sold through a network of premium appliance distributors and dealers worldwide.

For additional product information, to locate a Viking dealer in your area, please visit www.vikingrange.com. VIKING is a registered trademark of Viking Range, LLC. Viking products are sold under the BRIGADE brand in Canada.