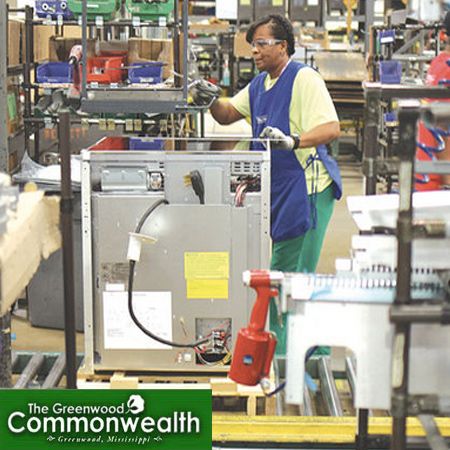 The production lines at Viking Range's Greenwood factories are humming these days as the company begins delivering a lineup of new and retooled products to customers and retailers.

After heading back to the drawing board for much of the past year and a half to redesign and re-engineer a number of the company's high-end kitchen appliances, company officials say they hope a number of product launches this fall will kick off growing sales.

Redesigned refrigerators, a new line of high-end gas ranges, a French door oven and new cooktops have all been rolling out of the company's Greenwood factories in recent weeks.

Tim Tyler, director of marketing for Viking, said the company has received overwhelmingly positive reactions to the products at trade shows, from industry publications and from dealers and salespeople.

That's left Tyler optimistic that the company's new products can help drive sales growth at the company, especially as it eyes growth in markets overseas.

Tyler and several other Viking officials recently returned from a busy week in New York, where they met with editors from a wide range of magazines and publications - including the Wall Street Journal, Good Housekeeping, Bon Appetit and Food & Wine - to spread the word about some of the company's new designs and products.

Since Viking was acquired at the end of 2012 by The Middleby Corp., an Elgin, Ill. - based commercial kitchen appliance conglomerate, Viking has pulled extensively from design expertise and technology from other Middleby brands, which have been put to the test in demanding restaurant kitchens.

For commercial appliances, "your features and products have to be dependable because if one breaks down, you're shutting the whole restaurant down," Tyler said. "With Middleby, you have this proven cooking technology and proven innovative products. The idea is to integrate those innovations into Viking's residential products."

Among the products Viking is set to launch that draw directly on Middleby innovations include a Viking-branded TurboChef high-speed oven, which will go into productin early next year. The oven pulls on commercial technology from TurboChef that's regularly used in chain restaurants including Subway and Starbucks.

The result, Tyler said, is a cutting-edge and incredibly fast oven that's been designed with Viking's typical attention to style and elegance.

Susan Bailey, director of product management for major appliances at Viking, said the new lineup - which includes a number of top-of-the-line (and top-priced) appliances - will help set Viking apart from the competition. The newly launched Viking Professional 7 Series ranges - which retail for upwards of $10,000 - add a number of new features to the company's classic products.

Although Viking created the first commercial-style appliances for the home kitchen, Bailey said a number of competitors have popped up in recent years.

"There are now over 25 other companies claiming to do professional products for the home, "Bailey said. "We needed to come up with new ways to differentiate us from the market again."

As the company looks to expand sales in the coming years, a growing area of emphasis will be the international markets, where Middleby CEO Selim Bassoul has said the company sees significant opportunities.

The company is working to earn certification from foreign governments in order to step up exports to markets in Europe, Asia, and Latin America. So far, Bailey said the Mexico and Brazil have seen strong sales of Viking appliances.

With foreign markets playing a larger role in the company's strategy, Bailey said that earning foreign certifications has become an integral part of Viking's product design process. Viking is also leaning on the extensive foreign connections and distribution networks of other Middleby-owned companies as it seeks to expand its foreign business.

The company is also bringing out a new lineup of smaller appliances to fit apartment kitchens in multi-unit high-rise buildings that are more common abroad.

"If we can the hproducts that we need, that's a huge growth area for us," Bailey said.