Turning the kitchen into a tech hot spot 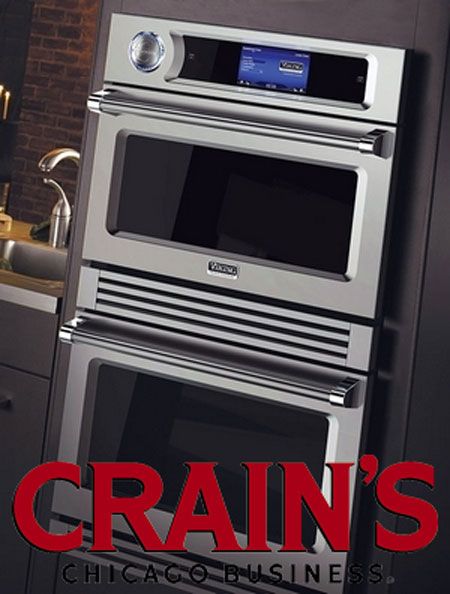 Middleby CEO Selim Bassoul stood before a packed room of investors at the Four Seasons Hotel in Chicago two weeks ago and hoisted above his head a heating element for an oven. “How many of you are familiar with this?” he asked. “This is a piece of crap.”

Of course, the metal coil was not one of Middleby's products. “This is 150-year-old technology,” he said, admitting that it is, in fact, the industry standard. “Everyone uses it.”

Middleby is known for its high-tech approach to commercial cooking equipment. The Elgin-based manufacturer boasts technology that can boil water in 15 seconds, steam vegetables without water and cook a 12-pound turkey in 42 minutes flat. Bassoul is trying to extend the market for such “Star Trek”-worthy appliances into household kitchens.

Venturing into the residential market, where it competes with Wolf and Miele, Middleby bought Viking Range for $380 million at the end of 2012. Since then, Middleby has rolled out more than 50 new products, integrating its commercial technologies, used by the likes of Morton's steakhouse, Starbucks and Papa John's Pizza, with Viking's high-end appliances. This fall, it released “the fastest oven in the world,” which can cook up to 15 times quicker than normal ovens. It retails for $12,599.

“Viking is going to be one of our most transformational acquisitions ever,” Bassoul told the roomful of institutional investors.

So far, the numbers are proving him right. When Middleby acquired it, Viking was just breaking even with low single-digit margins. Today, after slimming down Viking's workforce and operations, taking over its distribution network and developing new products, Viking sales are up 14 percent in the third quarter to $66 million, and it's looking to exit 2014 with 20 percent margins, double what they were last year.

Analysts are predicting that Viking will be crucial to Middleby's growth and expect Viking's sales to nearly double, to $450 million, in the next two years. Over the past year, Middleby's stock has outperformed the market, surging by 31 percent while the S&P 500 rose 14 percent. It closed Nov. 21 at $93.25.

Other new Viking products include a range, priced around $10,000, outfitted with souped-up burners that can hit 23,000 BTUs or melt chocolate on a paper plate without burning it. The new Viking double-door oven with an infrared broiler, another patented technology that cooks food from the inside out, runs about $7,400. “Since Middleby took Viking over, we have seen their quality do a complete turnaround,” says Joe Klett, manager at Glenview-based Abt Electronics. “For people that really want to cook and use these products, they see a substantial difference in the fit, finish and feel.”

Middleby recently acquired refrigeration company U-Line, which has annual revenue of $50 million, with the intention of competing with Sub-Zero.

“What Selim does best is add to his feast of products,” says Elliott Schlang, founder of Great Lakes Review, a boutique investment research firm in Cleveland. “When no one wanted things related to the housing industry because of the recession and the aftermath, he found an opportunity to buy it at the right price.”

Still, with Middleby's purchase of Viking, Bassoul is banking on a housing recovery that still seems unsteady. “There is no guarantee,” Schlang says.

Middleby's CEO since 2000, Bassoul has taken Middleby from a $100 million company to a $1.4 billion one. Schlang, whose firm limits itself to 30 of “the very best” Midwest companies, says Bassoul is a reliable risk-taker. “He doesn't rest. And the reason I own the stock personally is I think anyone who admires Selim as much as I do has to ride his coattails,” Schlang says. “If they can do half of what they've done in the commercial restaurant market, (Viking) will be an astounding success.”

At the Four Seasons, Bassoul zigzagged through the ballroom's aisles. “Are you getting what we do? We are a technology company,” he said. As the investors tapped away at their computers, he reached for another prop, a touch screen on Viking's newest oven. “OK, I am going to keep amazing you.”

View the full article on chicagobusiness.com.