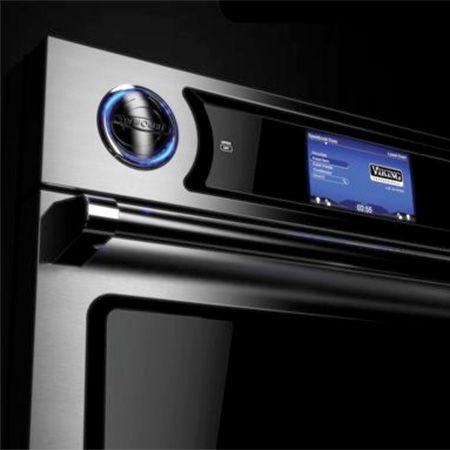 High-end appliance manufacturer Viking gave us a glimpse at the new Professional TurboChef wall oven (MSRP $12,599) at the 2014 Design and Construction Week. The TurboChef features a true convection oven on the bottom, as well as an upper oven that uses impingement to perfectly cook food in a fraction of the usual time. Viking is hoping to release the product by end-of-year 2014.

By this point you're probably wondering what on earth "impingement" is, and why Viking wants to put it in your home. Despite the intimidating name, this form of cooking is in fact fairly common—just not in residential kitchens. Anyone who has ever ordered a breakfast sandwich at Starbucks, or a pizza from Dominos, and wondered how the restaurant got the food so hot so quickly has already experienced the joys of impingement cooking.

The technology follows the same basic principle as true convection, with a little twist. Air is heated by an element and blown into the oven cavity, but where convection circulates air throughout the oven, impingement cooking uses jets of hot air that blast across the food from the bottom and top of the cavity.

Design and Usability
Viking sticks to what works

The TurboChef doesn't deviate much from the established Viking aesthetic. It sports the same sturdy construction and aggressive styling of its predecessors. The touch-sensitive LCD display is the only visible nod to modern trends.

The control panel isn't just there for show either, it's an absolute necessity. The TurboChef features over 400 custom cooking options for a number of common dishes—far more than a standard oven dial could handle. Users can select from a number of cooking modes, like Bake, Roast, Broil, Air Crisp, Toast, Dehydrate, and Favorites. After selecting the cooking mode, users can select from a list of food types, customizing the program to the dish.

Features
The Flash has nothing on this wall oven

Cool looks and funky control panels aside, the TurboChef's greatest asset is speed. The Airspeed technology impingement jets can blow at up to 60 miles per hour, and the oven uses a microwave assist function to finish off any dishes that need a few extra seconds. Viking estimates that this wall oven is 15 times faster than regular convection ovens.

Let's put that into more easily digestible terms: Where most ovens would take four hours to cook a large turkey, the TurboChef can do it in 45 minutes.

While we have concerns that faster cooking could result in dry, bland food, Viking assures us that this won't be the case. In fact, the jets cook the outside of the food so quickly that moisture and taste is retained. Additionally, the oven adjusts the intensity of the jets based on the type of food being cooked. When cooking a pizza, for instance, the oven can scale back its fan speed to keep your toppings from blowing all over the oven cavity.

While at its core the TurboChef is just an oven, it does require a few small adjustments to established routines. The oven alerts you 30 seconds before the food is done, allowing you to check to see if it requires more or less time, or if the browning mode needs to be activated. However, the settings are programmable, allowing users to set the oven to cook right through without the 30 second pause.

The oven also has a USB port for users to load the oven with new preset recipes downloaded from the Internet.

High Gear Cooking
Time is money, so get ready to pony up

We were pretty impressed with the TurboChef oven. The cooking speed is indeed impressive, and Viking has definitely nailed the home-professional oven aesthetic. However, as usual there are certain trade-offs one must accept in exchange for blistering fast food preparation.

Even habitual Viking buyers may balk at the staggeringly high price tag—equivalent to prices for complete high-end ranges. But, Viking believes that the price is reasonable when considering the value the appliance brings to the home.

Furthermore, as impressive as three-minute cooking times sound, bear in mind that the oven still requires a preheat before use. The TurboChef takes between nine and 12 minutes to reach temperature.

Aside from reviewing ovens and cooktops, James moonlights as an educational theatre practitioner, amateur home chef, and weekend DIY warrior.