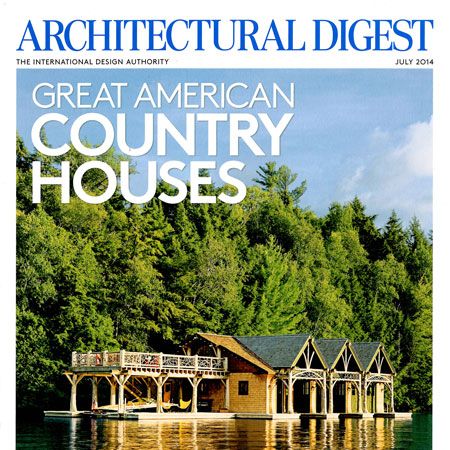 Sanford I. Weill and his wife, Joan, are uber New Yorkers. Known as Sandy, he is the former head of Citigroup and the longtime chairman of Carnegie Hall. She chairs Manhattan's Alvin Ailey American Dance Theater. Then there is the city's Weill Cornell Medical College, to which they have donated many millions of dollars. That being said, the Brooklyn-born philanthropists have succumbed to Northern California's allure and put down roots in Sonoma Valley.

Situated on some 360 rolling acres that include a vineyard-the 2012 Weill a Way red received a 94 on Robert Parker's 100-point index of excellence-the Weills' compound is at the end of a vertiginous drive that meanders through fields of sprightly California poppies and live oaks. "We visited in August, four years ago, and the gardeners handed me a plum and a white peach," Joan recalls of their first encounter with the property. "Then the brokers brought us back one night and lit an outdoor fire. That clinched the deal." A year later the couple put their Central Park West penthouse on the market and started packing.

Conceived in the 1990s by Walker & Moody Architects, the firm that masterminded the Auberge du Soleil resort in nearby Rutherford, the Sonoma estate suggests an ancestral enclave in Tuscany. Italian terra-cotta tiles sheathe the higgledy-piggledy roofline of the two-bedroom main residence. A covered breezeway connects that building to a four-bedroom guesthouse-equipped with an indoor pool and a wine library-added by the Weills. There's also a walled garden overflowing with old-fashioned roses, courtesy of the landscape architect Mai K. Arbegast, who devised the verdant grounds for the property's previous owners.

To update the interiors, the Weills relied on designer Mica Ertegun, who began working with them on various homes eight years ago. "We were a little intimated by her back then," Sandy says. "Her reputation is so big." Today she is the Weills' aesthetic alter ego, her portfolio including the couple's former New York apartment and their villa in the Bahamas. Not only does the decorator share "very similar tastes," with her clients, she describes them admiringly as people who "appreciate that every corner of a home needs to be looked at." The kitchen's pot rack was designed by decorator Suzanne Tucker for the previous homeowners; ceramic hens by artist Catherine Hunter are displayed above the Viking range.

Taking pride of place in the Sonoma main house's sun-splashed entrance gallery is a 1940s Fernand Leger mosaic whose brilliant blues, yellows, oranges, greens and reds dance against a light-ocher wall. To accommodate two of the couple's Thomas Hart Benton paintings, the living room's carved overmantel was removed, one of several architectural adjustments that Ertegun and John Schaberg, a senior project director at her firm, MAC II, made to the dwelling and its outbuildings. "I'm not a collector," Sandy says modestly. "But I know what I like." And what he likes encompasses everything from the languorous fashion illustration that hands in the soothingly neutral master bedroom to the giant outdoor sculptures of pink and red roses by Will Ryman. (The over-scale blooms were part of a public-art commission installed along ten blocks of Park Avenue in 2011.). When the Weills shop for art, Joan says they both have "the right of refusal"-though, her husband laughingly admits, the case of the Leger, she lost.

Many of the Weills' most treasured Manhattan belongings have settled comfortably into their paradisiacal new surroundings. "The apartment they gave up had beautiful things, so we used quite a bit in Sonoma," says Ertegun. Defining one side of the dining room is a captivating Art Deco wood screen, its gilded reliefs representing the four seasons. Complementing it are two custom-made round dining tables and blue leather-clad chairs, the latter replicas of 1920s Emile-Jacques Ruhlmann design. Underfoot is an Ertegun creation, a carpet resembling a watercolor of a stream, its rippling-water motif inspired by a nearby Jean Dunand painting that depicts deer leaping across a brook.

Though the interiors are fetching, the Weills often find themselves relaxing outdoors. Morning coffee is taken on one of the terraces, and Joan enjoys long walks on the grounds with the couple's bichon frise, Angel. Still, culture calls. Shortly after moving in, they heard about fundraising struggles at the Green Music Center, then unfinished, at Sonoma State University. The couple asked the acclaimed Chinese pianist Land Land to vet the concert hall's acoustics, and once he gave the thumbs-up, they promptly donated $12 million to complete the William Rawn-design project, which was modeled after Rawn's Seiji Ozawa Hall at Tanglewood, the summer home of the Boston Symphony Orchestra. Sandy soon became chairman of the center's advisory board, and he and Joan recruited Zarin Mahta (former president of the New York Philharmonic) to become its coexecutive director. They've also coaxed world-class talents-Yo-Yo Ma and Renee Fleming among them-to perform there, putting the small college on the cultural map.

Unable to make a total break from New York, Sandy still keeps an office on the 46th floor of the General Motors Building, his desk taking in panoramic cityscapes. But when he works at home in California, the views are all about flowers, fruit trees, and the mountains that frame the Sonoma Valley. "It's a much more relaxed environment," he says. "I'm still debating which I like the best." Luckily he doesn't have to choose just one.