Wood and Concrete Join Forces in a Handsome Loft By Kelly LaPlante, Houzz 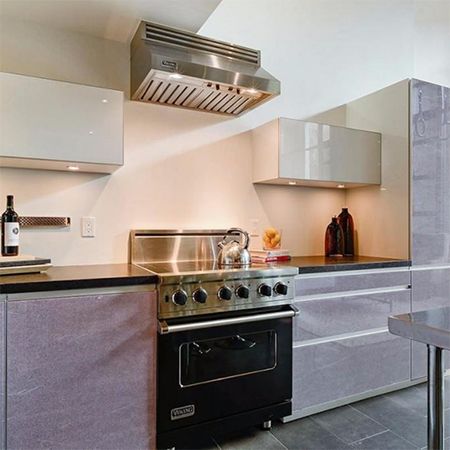 Photos from the San Francisco Association of Realtors

Houzz at a Glance

Who lives here: A single professional man in his 30s

Architect Andrew Feldon is a firm believer that all projects benefit from a healthy dose of collaboration with clients — and he has plenty of humorous tales to tell about what that process can entail.

When a San Francisco manufacturing plant, built circa 1910, was converted into industrial live-work lofts, he was asked to help a homeowner customize his unit to create a warmer feel and a greater sense of space. The first collaborative discussion began almost immediately. “There’s a doorway that enters the space from the interior lobby of the lofts, and it kind of bothered me,” Feldon recalls. “It looked cold and sucked the life out of the space. I’d proposed putting in a wall to cordon it off and define the spaces better.” The owner wasn’t so sure, and he and Feldon went back and forth about it before he finally agreed, installed the separation, lived with it for two weeks — and then ripped it out.

“When you open yourself up to teamwork,” Feldon says, “you have to be ready to accept the fact that someone else’s ideas might trump your own. It’s all part of the deal.”

Invariably, the first thing people ask about are the rings. “Yes, they are functional,” Feldon says. “The client had installed them to use for exercise, and we decided to keep them in the space and let them become decor. I suppose you could still use them, but you’d be swinging above the furniture now.”

A wall, mirrored from floor to ceiling, creates a greater sense of space and light (and gives the illusion of a second set of rings, which a person might be tempted to swing from after a cocktail or two).

The unit is on the ground floor, which means that, technically, it is a live-work loft with a storefront that can be used to conduct business. During its rehabilitation, the building got new glass fronts in a style that melds beautifully with the cast-concrete structure.

The building features grand exterior arches and comes up about 4 feet off the sidewalk, which helps separate residents from the street activity. This is especially important to homeowners, including this one, who use the space to live and not to work.

Reclaimed-wood posts pull double duty as structural supports and a history lesson. Knowing that this building is more than 100 years old, Feldon and the homeowner wanted to bring back some of the historical references and warmth that were lost when the plant was renovated to serve a new function. They hired a contractor specializing in woodwork and concrete. “We wanted to tell a story about the building,” Feldon says.

The homeowner’s collection of furnishings and industrial objects is right at home with the warm industrial vibe that he and Feldon created together. Interior designer Elizabeth Ergood, Feldon’s associate, worked in custom lighting that serves to differentiate the spaces in the open floor plan. To maximize the living space, the kitchen became smaller and more efficient.

In the dining area, pieces from the homeowner’s art collection set a dramatic scene for dinner parties.

Feldon and his team saved the homeowner money by keeping the bathroom fixtures where the builder had put them. New paint, finishes and lighting personalize the space.

“We didn’t want to overdo it with wood and just make a wood box, so we were careful to introduce that element in various ways and small spaces to strike a balance,” Feldon says. Reclaimed wood on the counter and floor help warm up a previously cold and impersonal laundry room.

A staircase (originally made of plywood and covered in carpet) to a sleeping loft got a new look in reclaimed lumber. Reclaimed post and stairs: Heritage Salvage Exposed concrete ceilings and supports are part of the original structure. When the builders converted the manufacturing plant into lofts, they tore out everything except for these structural elements, and then they divided it into individual spaces with drywall and studs.

The designers reduced the footprint of the sleeping loft significantly, and reworked the kitchen to rest directly beneath it to increase light and living space.