The ethereal combination of pecans and caramel, known as pralines, are a beloved Southern candy. In this recipe, those flavors are blended into rich and decadent homemade ice cream. It will remind you of really good butter pecan ice cream, but it’s even better!

For the Praline Pecans: Heat a large sauté pan over medium heat; add the butter and cook until foamy. Toss in the pecans and salt; cook, stirring constantly, until the aroma is released and the pecans begin to brown, about 5 minutes. Set aside to cool.

Place 1/2 cup of sugar in a small sauce pan; cook over medium heat until the sugar dissolves and forms a smooth, golden liquid. Stir in the sautéed pecans, and cook one minute more. (Note: The mixture may form lumps, but they will be broken up in step 3.)

Pour the mixture onto a lightly oiled baking sheet (or silicone mat), and allow to cool completely. When cool, place in a food processor, and pulse 3 to 4 times to break up the large lumps.

For the Custard: Combine the eggs, evaporated milk, whole milk and sugar in a large sauce pan. Cook over medium heat, stirring constantly, until the mixture registers 170°F on a kitchen thermometer, about 20 minutes (do not boil). Remove the custard from the heat, and cool quickly in an ice water bath, stirring often.

Stir in the sweetened condensed milk and the vanilla; refrigerate the cooled mixture, tightly covered, for at least 1 hour.

Fold the whipped cream into the cooled custard, then stir in the praline mixture. Pour the mixture into an ice-cream machine, and freeze according to the manufacturer’s instructions; store, tightly covered, in the freezer. 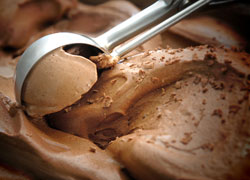