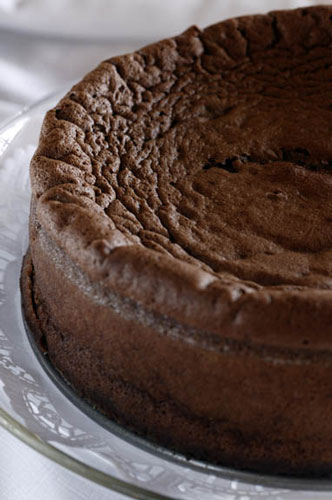 I’m married to a chocoholic. In fact, each January 18 I am responsible for coming up with a dessert that’s jaw-clenchingly chocolate for my husband’s birthday. This flourless Mexican chocolate cake fills the bill perfectly, with its truffle-like consistency, Kahula bite and hint of cinnamon. And, the difficulty of preparing the cake is decreased when I use my Viking Stand Mixer.

The cake gets a delicious crunch on the outside when a springform pan is buttered and coated with sugar. The cake is made of several components including a melted combination of chocolate and butter, an egg yolk-sugar mixture and beaten egg whites. I like to prepare the egg yolk mixture in my stand mixer, scrape it into another bowl and then wash the bowl from the mixer and use it to beat the egg whites.

The cake can be prepared several hours before serving, and leftover cake can be refrigerated. When refrigerated, the cake will take on a firmer, more truffle-like, texture.

Place an oven rack on the middle shelf of the oven. Preheat the oven to 350 degrees F. Brush a 10-inch springform pan with melted butter and coat the bottom and sides of the pan with sugar. Tap out any excess sugar.

In a double boiler over barely simmering water, melt together the chocolate and 1 cup butter. Stir until smooth. Set aside.

In the bowl of a stand mixer or in a large bowl, using a hand-held mixer set at medium speed, beat the egg yolks and salt until blended. Gradually add 1/4 cup sugar and beat for 4 to 6 minutes, or until the mixture is pale yellow and forms a ribbon on the surface of the batter when the beaters are lifted. Stir in the Kahlua, cinnamon and vanilla. Gradually whisk the melted chocolate into the egg yolk mixture.

In a large, clean bowl, beat the egg whites and cream of tartar with an electric mixer at low speed until foamy. Increase the mixer speed to medium-high and continue beating until the whites become opaque and form soft mounds in the bowl. Continue beating, adding the remaining 1/2 cup sugar 1 tablespoon at a time, until soft peaks form.

Stir one-third of the beaten egg whites into the chocolate batter. Gently fold in the remaining egg whites just until blended.

Spoon the batter into the prepared pan and bake for 25 to 35 minutes, or until the cake appears puffy and firm. The cake should still be moist but not liquid in the center, so a bamboo skewer inserted into the cake should not come out clean.

Remove the cake from the oven and cool on a wire rack for 15 minutes. (The center will fall slightly as it cools.) Remove the sides of the pan. Slice and serve the cake slightly warm or at room temperature. Drizzle serving plates with chocolate sauce.