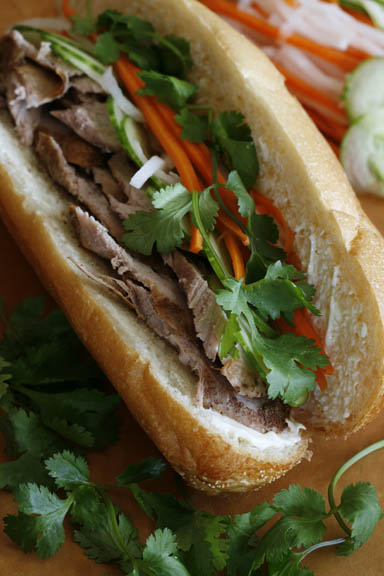 Americans are enamored with sandwiches, from Po Boys in Louisiana to Cheese Steaks in Philadelphia. But many would be surprised that there’s an Asian culture that loves a sandwich as much as we do–Vietnam.

Vietnamese sandwiches, called Banh, are the perfect example of the French influence in their cuisine. Delicious crisp French-style baguettes are filled with flavorful meats and are garnished with crispy cucumber slices, marinated carrot and daikon salad and cilantro leaves. You can find these wonderful sandwiches in Vietnamese hubs like New York City, San Francisco and even Orlando, Fla. When you see a “banh” stand be sure to get in line. In the meantime, here’s a delicious version to try at home.

Reduce oven temperature to 375 degrees F. Cut each baguette in half crosswise, and then split almost all the way through, leaving halves attached on one side. Spread inside of baguettes with mayonnaise. Thinly slice pork and divide it among the baguettes. Place the baguettes on a baking sheet and bake for 5 minutes, to warm the filling and crisp the crust. Remove from oven and add a layer of the cucumbers, Marinated Carrots and Daikon and cilantro to each baguette and serve immediately.