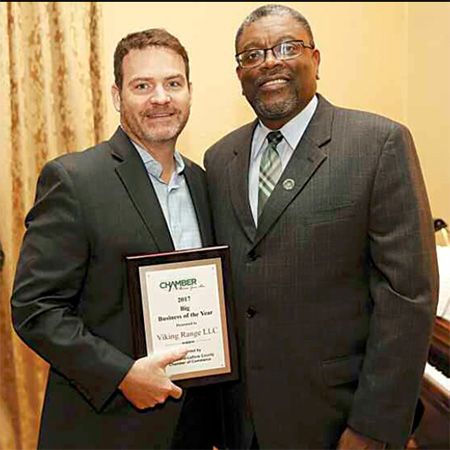 In 1987, Viking Range, originated ultra-premium commercial-type appliances for the home, creating a whole new category of home appliances. Committed to innovative product design, unrivaled performance and peerless quality, Viking is headquartered in Greenwood, Mississippi, and is a subsidiary of The Middleby Corporation, a long-time leader in commercial kitchen technology. The Viking name is recognized globally as the foremost brand in the high-end appliance industry and is sold through a network of premium appliance distributors and dealers worldwide.

Viking manufactures most of its ultra-premium products here in Greenwood, including ranges, cooktops, ovens, refrigeration, ventilation and outdoor products. Viking appliances are available in a vast array of sizes, colors and configurations to make every conceivable kitchen design and cooking style a reality. Since 2013, Viking has created more than 200 innovative and award winning products. Everything Viking does is driven by their relentless focus to make today better than yesterday. Viking continues to serve the community with their commitment to quality, innovation, and customer service.

Along the way, Viking created its own culture of creativity and innovation. Innovations require innovators, and every single member of the Viking team fits the bill. From the board room to the plant floor, everyone shares the vision of perfection. Wellness opportunities are offered, and education is encouraged. Viking has partnered with local colleges to make it easier for their employees to earn degrees. They have also established training programs to teach specialized manufacturing skills and supplemental training is readily available for employees eager to advance their position.

Since the introduction of the flagship range, Viking has become synonymous with the epicurean lifestyle. Viking soon realized this was more than just a kitchen. So the Viking Hospitality Group was created in 2003 to promote and savor the finer things – and just plain good things – in life. Comprised of The Alluvian Hotel (2003), The Alluvian Spa (2005), Giardina’s Restaurant (2003), The Viking Cooking School (2005), and Studio A (2006), the group delivers exquisitely genuine southern hospitality.

Viking is continuously in the news. Viking has been named winner of “Best Places to Work in Mississippi” by Mississippi Business Journal for an unprecedented 10 times and was most recently named as the 2017 winner. The Viking Professional 7 Series Range was also honored as a 2017 Architectural Digest “Great Design Award” Winner. In hospitality news, The Alluvian was most recently recognized with the “Convention South 2017 Reader’s Choice Award” and other recognitions include – Conde Nast Traveler “Hot List”, Mississippi Magazine “Best of Mississippi” Awards taking home “Best Hotel/Resort”, and being recognized in the “Best Day Spa”, and “Best Kitchen Shop” categories. Since 2006, The Alluvian has received the AAA “Four Diamond Award” and Giardina’s has received the AAA “Three Diamond Award”.

Viking is seen as the choice of many notable chefs, celebrities, and designers around the world. As a result, Viking is seen on many TV shows and movies as well as celebrity homes. Viking appliances can be seen in The White House, Frank Sinatra’s Palms Estate, the home of Oprah Winfrey and many more. Many TV shows showcase Viking products such as ABC’s The Chew and Giada’s Summer Series. Viking recently supplied product for Gordon Ramsey’s The F Word. After Gordon experienced the performance of the new Viking ranges he insisted that the entire MasterChef set be outfitted with Viking product as well.

Viking’s growth has led to the revitalization of downtown Greenwood. It seems that with each corporate expansion, another historical building was restored. The Viking offices are spread through buildings all across Greenwood, some of which are listed on the National Register of Historic Places. The comfortable feel of the architecture is only fitting for the family atmosphere at Viking.

A firm believer in community improvement Viking sponsors many events and makes donations for local causes. Money helps, but nothing happens without time and heart. Local United Way and American Cancer Society Relay for Life count among our worthy local endeavors. Not only are Viking employees involved in the community events, they are involved in their coworker’s trials and efforts too. Just recently Viking employees initiated efforts to help the military plane crash first responders and hurricane Harvey victims. Each October, Viking celebrates employee’s hard work and dedication throughout the year with an employee picnic. During this time, team members are rewarded and celebrated because without them, what Viking does would not be possible.

Devoted to tourism, Viking and Viking Hospitality Group are continuously working to get people here to Greenwood through efforts such as The Viking Half Marathon coming up in March. Most weekends of the year, you will find The Alluvian Hotel and Spa booked with visitors from around the south coming to Greenwood to see what the experience is all about. Danielle Morgan, the Greenwood Convention and Visitors Bureau Executive director said, "Viking Range has been a tremendous driver for tourism in Greenwood. The Alluvian Hotel & Spa, Giardina's, and the Viking Cooking School have been a vital part of making Greenwood a travel destination. The level of reinvestment in our community has been an invaluable part of creating an environment where tourism can thrive. We salute Viking for being an important part of our community and look forward to working together to grow the Viking experience for many years to come."

Viking is a community within a community. These are Viking people, and they are their greatest asset. Their encouragement and elbow grease have helped push Viking to where it is today.

The finest kitchen in the world doesn’t amount to much unless it is filled with your family and friends. Viking Range applies this same philosophy to their offices and factory floors. As an employer, Viking makes a point to take care of their people – as evidenced by one of the highest retention rates in the country.
Even though Viking products ship around the world, the company has always stayed true to its roots in Greenwood. The Viking range was born here, and the decision to set up shop (and more importantly, keep shop) in our hometown is a testament to the value of their roots and commitment that they have. At Viking, people are their greatest asset. They are very proud of their employees and the products that they build here in the Mississippi Delta. In the end, Greenwood is more than where they work and where they live, it is who they are at Viking.