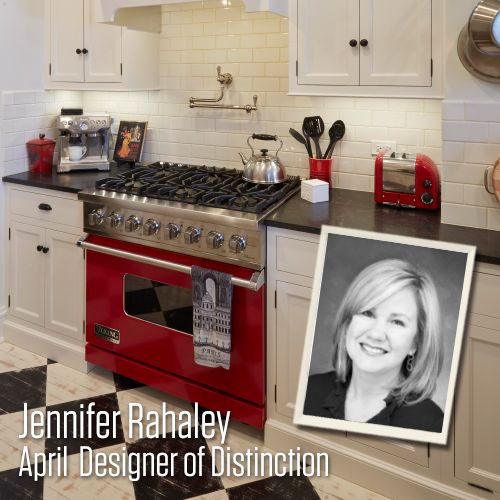 Viking Range, LLC, the leader in residential kitchen technology, has named Jennifer Rahaley as the April Designer of Distinction. Jennifer is an award winning, nationally published designer at DDK Kitchen Design Group based in Glenview, Illinois and is the fourth monthly winner in the 2017 Viking Kitchen Design Competition. Designers from around the United States are vying for the coveted honor to become the 2017 Viking Designer of the Year.

Jennifer describes the project below:

This residential kitchen and bath project is located in Evanston, IL. The vintage-style restoration of the 1920’s condominium combines personal details with bold accents to create a space that is both functional and historically accurate. Partially inspired by the homeowner’s recent trip to Paris, the project has many French accents. The client is an avid cook, therefore designing the compact kitchen to include high end Viking appliances was a must. Custom Dutch Made inset cabinetry conceals the Viking refrigerator, dishwasher and built in hood. The highlight of the kitchen is the Viking Apple Red range, combined with black and white accents throughout the kitchen. These elements all allude to the French glamor and vintage style that the homeowner had dreamed of. It is a small space that functions well because of the appliances and design.

DDK Kitchen Design Group has been remodeling homes in the Chicagoland area since 1978.

Jennifer Rahaley is an award winning, nationally published designer at DDK Kitchen Design Group based in Glenview, IL. She has 17 years of Interior Design experience, specializing in kitchens and baths. Jennifer has also served as the North Shore Peer Group leader of the American Society of Interior Designers for the past 12 years.