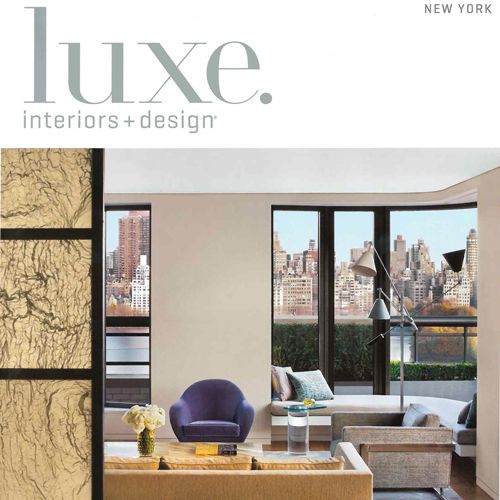 When Cristie Kerr and Erik Stevens first stepped into the apartment they now own--perched up high overlooking the Hudson River--they were transfixed by the nearly endless vistas. "You could see the Statue of Liberty from the bedroom," Cristie says. "It had huge windows, and from every room, there were these great views of Manhattan." But the apartment's less than inspiring interior didn't live up to those breathtaking panoramas, so the couple brought in designer Thom Filicia to spin some magic.

The touring pro golfer who has topped the world rankings and her husband are in constant motion, so they envisioned a restful sanctuary to come home to and entertain in. "With our travel schedule, we're not anywhere for more than a couple months out of the year," says Cristie who is also an avid philanthropist. "We wanted a place to just sit down and take a deep breath."

With the owners' desires in mind, Filicia set out to design calm interior spaces. "They wanted it to be stylish but not to contrived," he says. "it had to be young but not silly, elegant but not too precious. They wanted to be able to go from reading the newspaper on a Sunday afternoon to having people come over for a glass of wine." Lucky guests might even get to enjoy a glass of Curvature, a wine label Cristie launched in partnership with Pride Mountain Vineyards in Napa to benefit breast cancer research.

The original layout didn't make the best use of the square footage--particularly for entertaining--so Filicia had contractor Leon Katselnik remove the walls between the kitchen and the main living space, for example, to create a more free-flowing interior. An avid cook, the lady of the house desired a functional well-conceived kitchen. "Everybody congregates in the kitchen when you're entertaining, so we wanted a large island that would not only serve as a place to cook meals, but also to set out appetizers and enjoy drinks," she says.

"The kitchen was quite a feat, because the oven and other appliances got moved to the center island," says Katselnik, whose team had to reroute the electrical to accommodate the shift. "But luckily, they changed the floors, and were able to modify it." An abaca wall covering from Holland & Sherry envelops the kitchen. Teak cabinetry, custom-designed by Filicia and fabricated by CKS Architectural Millwork in Durham, North Carolina, evokes a ship's interior. The faucet, from David & Warshow is by Dornbracht and the refrigerator and wine storage are by Viking.

In the master suite, Filicia had the bedroom and bathroom configuration altered so the bed would face west, toward the view, and in the master bathroom, the freestanding tub and tiny shower were replaced with a large luxurious shower that better suites the couple's needs. Much-needed closet space was also added.

With the layout reworked, Cristie and Erik wanted all of the furnishings throughout their home to stand the test of time, so Filicia chose pieces that were fresh yet timeless. He warmed up the spaces with rich finishes as well as interesting wall coverings, such as the recycled newspaper backdrop of the study and the textural abaca in the kitchen that even covers the ceiling. "They give the apartment depth and personality, and that's important in these sorts of cool, modern interiors," he explains.

Throughout the renovation, the couple was traveling, so the team would send packages with materials for them to look at. "I'm a golfer, so I'm visual with my plan to hit a golf shot," she says. "I feel the grass, I feel the clubs, and different shots have different feels, so I think that carried over into the design process."

These days, there isn't much the homeowners like more than lounging in their cozy Manhattan aerie, looking out across the dazzling city. In the very midst of it all--with world-class restaurants and shopping just steps away--they now have a peaceful retreat. "It really feels like home," Cristie says. "There are times when we don't even want to leave."

View a copy of the full article here.