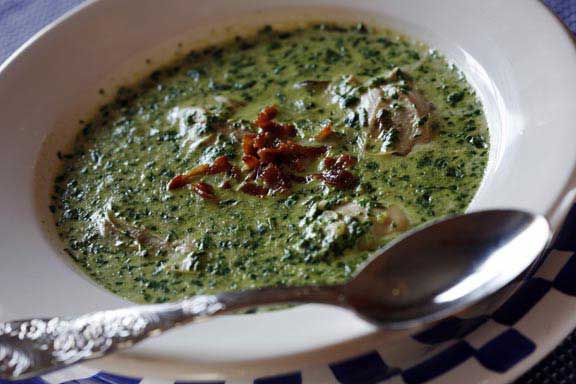 Oysters Rockefeller is a classic combination of oysters on the half shell bathed in a luscious green sauce, sprinkled with a little cheese and broiled until bubbly. Here, the combination of ingredients is simmered together for a soup that has all the flavor of the original dish.

The soup is simpler to prepare than the classic, since the recipe calls for shucked oysters. And, the soup can be partially made ahead. Just prepare the soup up to the addition of the oyster liquor, heavy cream and half and half. At serving time, bring the mixture to a boil and add the oysters and remaining ingredients.

Chopping the fresh spinach in my Viking food processor really cuts preparation time. If you’d rather use frozen spinach, simply substitute a cup of frozen chopped spinach. Drain the spinach well and chop very finely before adding to the soup. While the recipe calls for spinach as the “green” ingredient, you can substitute finely chopped romaine or Bibb lettuce for part of the spinach, giving the soup a milder green color and a flavor even more reminiscent of the New Orleans classic.

Add oysters, spinach and Herbsaint or other liqueur. Season with salt and pepper. Ladle into bowls and sprinkle each serving with some of the shredded cheese.
Makes 8 servings.